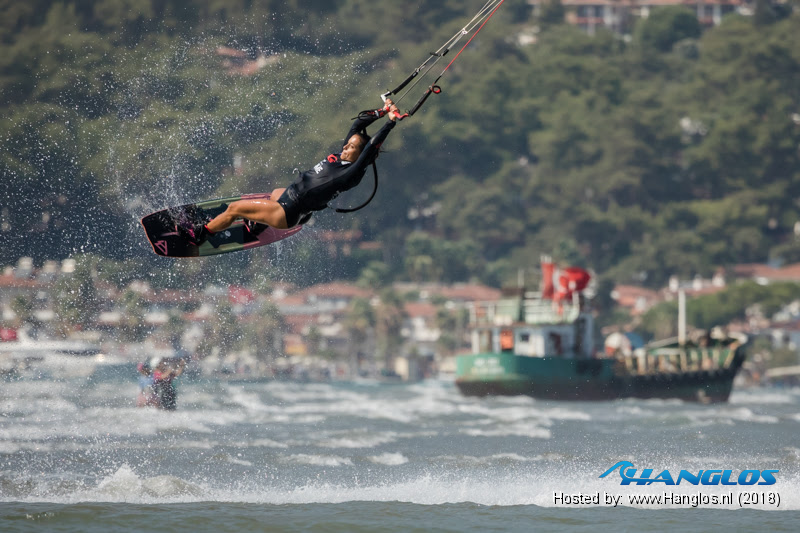 The first day of competition in Akyaka was a huge success, with Round 1 for both the men and women completed.

Akyaka is well know for its summer trade winds, which kicked into action at midday for the first day of Elite Freestyle Competition. The day commenced with Men's Round 1, as the wind speed reached 13 to 16 knots average. This was a challenge for the riders in Heat 1 who generally perform better with stronger wind conditions. Youri Zoon, former World Champion from the Netherlands put on a strong performance despite the light wind, and landed all 7 of his trick attempts, placing him in 1st place and opening the door directly to Round 3. Val Garat from France rode confidently on his new Duotone equipment and landed a nice Slim 7 on his last trick attempt, placing him in 2nd. Joselito del Rosario from the Dominican Republic landed an impressive BS315, but 3 crashed trick attempts placed him 3rd.

Alex Pastor, Former World Champion, was dominating from the get-go, clearly eager to be back at freestyle competition. He landed each of his 7 trick attempts with good scores and cleared his way to Round 3.  Young French newcomer Nino Liboni was motivated to show the Elite what he was made of. He landed several good tricks but two crashes cost him points and placed him 2nd. Julien Krikken from France pushed himself hard, almost landing on the beach several times, but missed a couple of attempts and finished in 3rd position for Heat 2 of the day.

The wind conditions increased slightly for Heat 3 which was a close one between all three competitors. Gianmaria Coccoluto, new Italian talent in the Elite Championship, showed his determination and placed himself in 1st position, followed closely by Arthur Guillebert from France and Jerome Cloetens from Spain/Belgium. Each competitor performed well and it was proof that there are no easy rounds in the Elite Championships, as the level is extremely high right from the start.

Set Teixeira from Brazil showed us what he is made of for Heat 4, landing a series of solid tricks that included a high scoring KGB5. Paul Serin from France landed only 4 of his 7 trick attempts, but the solid scores placed him in 2nd, with young newcomer Louka Pitot from Mauritius nailing a Double Heart Attack, but finishing 3rd against his other competitors.

Heat 5 went to French rider Nicolas Delmas, who stomped each trick and passed directly to round 3. Posito Martinez from the Dominican Republic and Lucas Ferreira from France had to settle for 2nd and 3rd, giving them a second chance in the next round.

Valentin Rodriguez from Colombia was on fire for the start of Heat 6, and blasted his way through trick after trick, getting a 9.67 for his Heart Attack 7. It was an incredible performance for this young rider who is new to the Elite Championship. He passes directly through to Round 3. Stefan Spiessberger landed a nice KGB5, and passes to the 2nd round, together with Rens van der Schoot coming in 3rd, but getting a second chance in Round 2.

Adeuri Corniel is back for this season as a force to be reckoned with. He stormed into his heat, landed every single trick attempt, including a very nice KGB7, securing his spot in Round 3. Fellow Dominican Luis Alberto Cruz was not far behind, and also managed to land all 7 attempts. He passes through in 2nd place followed byAnthar Racca from Mexico, who landed a good BS317 but had three crashes which cost him points.

The final men's heat of the day was Heat 8, another exceptional performance from our current World Champion, Carlos Mario. Since his outstanding results last season, he proved that he has not rested in these last months, opening the heat with a massive Heart Attack 7 scoring 9.6 He followed through landing every trick attempt, with 3 of them scoring in the 9's. He cruised comfortably through to Round 3. Maxime Chabloz, just 17 years old from Switzerland, has been training hard throughout the year, and it showed in his performance, as he landed the first ever Back Mobe 7 seen in competition, though the landing cost him points. He finished the heat in 2nd place, followed by local Turkish rider Serkhan Erkek who faced a tough heat but had plenty of support from the local fans across the beach!

The Women's Round 1 was next in sequence, where Spanish athlete Rita Arnaus showed her fine talent, landing a solid Heart Attack scoring 7.6. She was delighted to perform well in her heat, and advanced directly to Round 3. Vera Klabbers from the Netherlands opened with a good S-Bend to Blind and landed in 2nd place, followed by local wildcard Gisel Ozen, who showed good effort against the Elite Women.

Heat 2 gave Mikaili Sol her long awaited opportunity to finally compete in the Elite Championship, as this year she turns 14. She rode well and landed solid tricks throughout, including a powerful Heart Attack that scored her 8.73 points. Paula Novotna from the Czech Republic showed her strength and powerful riding, landing a nice S-Bend to Blind, but did not score enough in total to put her directly through to Round 3. Paula will go through to Round 2 tomorrow, together with local Turkish rider Leyla Kut.

French athlete Maureen Castelle won Heat 3, and secured her Round 3 spot. Another new face to the Elite Championship was up against her, Kristina Belogorskaya, who landed a good S-Bend to Blind but couldn't quite top the performance of Castelle. Kristina and Therese Taabbel from Denmark will both have another opportunity tomorrow in Round 2.

The final women's heat of the day was Claudia Leon from Spain against Francesca Bagnoli from Italy. Leon is another new face to the Elite Championship, and at just 17 years of age, proved that she has the level to be competing amongst the best. Both athletes were neck and neck through out the heat, with Leon landing an outstanding Heart Attack scoring 8.47. Bagnoli responded with a Heart Attack of her own, scoring slightly lower at 8.43. Both women put on an fantastic performance, and finally it was Francesca Bagnoli who passes through to Round 3 directly, winning by less than 1 point.

The final heat of the day was Men's Round 2 Heat 9, which was postponed after three trick attempts due to the decrease in wind, but will be continued tomorrow.

The skipper's meeting has been called for 10am tomorrow with a first possible start at 11am. The focus will be on completing Round 2 for both men and women.