That’s it! Nine epic days later, two huge double eliminations complete in the men’s and women’s kite-surf division after a ragingly tight Freestyle competition earlier in the week. Here’s the story of how the two wave finals played out on the Heritage Bel Ombre reef, starting with the women’s final which was the event’s final show, finishing at just after 3pm. Scroll down for the men’s report.

Find all today’s heat reports here on the liveticker.
You can also find the individual wave scores here.

Just like Sebastian Ribeiro, we saw another heroic comeback performance from Ninja Ricot in the women’s doubles today.

In her seventh heat of the day (astonishingly her sixth back-to-back), Ninja (a German who has lived in Mauritius for many years) was still firing well, and volleyed up a quick pair of waves, gaining a 5.47 and 6.2, throwing a tasty 11.67 firmly into Jalou’s court.

As the next set reared up, both women came in on the first wave; Ninja further upwind pulled away and let Jalou go at it, but the reigning World Champ managed just two turns causing no threat to Ninja’s tally.

Jalou’s legs were clearly looking fresh, particularly coming off the top after such strong bottom turns. She was ultra fluid, kicking up a big fan of spray as she carved the board back beyond 180 towards the white water.

Both these women have beautiful caving and progressive surf styles. When they throw themselves low into a bottom turn they turn just as sharply back up the face as the men. We have two of the top three women in wave kiting going head to head here (we’re missing Moona Whyte who was competing on home turf at a US event).

Striking back hard on her fifth wave, Langeree was awarded with a high 7.7 and was suddenly sitting on a two wave tally of 13.83. Strong.

Ricot (formerly Bichler) is the island’s heroine having won two world tour events on Mauritius 2012 and 2016, had already managed a score of 13.17 against Edin a couple of hours earlier in round five and 14.1 in her single elimination heat against Jalou.  (Jalou won that heat though with 15.77 from two waves, ejecting Ninja early, which is why Ninja had to fight her way up through so many double elimination rounds today).

Ninja needed to only match Jalou’s 7.7 to take the lead. Jalou was scoring again, working three turns on the inside before punching out over a mini close-out to see Ninja on a big one. She reeled out one, two, three huge turns and then a fourth against the white water on the inside. Her rail was somehow just about holding on along with her legs on those last two turns – who knows how many bottom turns she made today? Somehow she then managed a tail slide at the end. That could be up in the 7s if the judges didn’t see too much of a faltering line with her tired legs. It took a while for that score to come in… it was a big moment. 6.73: just not quite enough.

Jalou was getting stronger as the heat went on (this was her first heat of the day remember). Her turns were sharp and aggressive and she was shredding fluidly along the sections now. An 8.27 popped up on the livescore, a crushing blow from the world champion and she was sitting on 15.97, the highest heat score of the event.

The waves continued – this set had been kind to the contest – but none of the remaining waves added to the score, despite some meaty hacks at the lip from both women. The wave count was very even, too: 13 waves to 12 in Jalou’s favour

Jalou’s tight and incisive top to bottom surfing is compact and controlled, keeping her right in the curling section all the time. Throughout the heat it’s fair to say that Ninja had the biggest hacks at the top of the biggest waves, but it was Jalou’s totally fluid, constant rail-to-rail surfing with speed and power that earned the biggest rewards from the judges. They may not have been the biggest waves in the set, but she worked them ideally to her strengths. 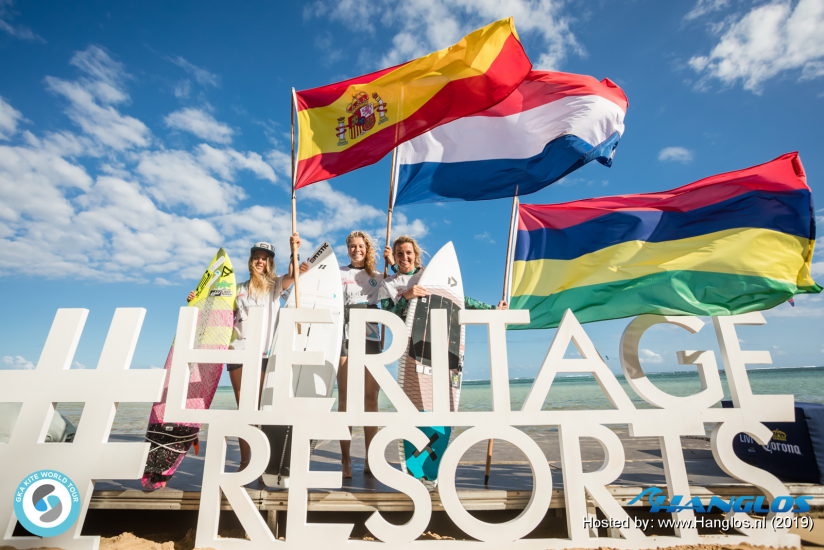 Sebastian met James Carew in the men’s first heat of the day – the semi-final. The Duotone team mates went toe-to-toe, wave-for-wave in an all out back side power surfing assault. As predicted the wave count was high with a minute to go: 12 for James, 13 for Ribeiro; James ahead by a whisker. Sebastian’s surge through the double elimination finally came to a finish. He won seven heats yesterday after a disaster in the single elimination and somehow worked his way up to the podium.

SEMI-FINAL RESULT:
Carew wins 15.06 to 14.8 and would face single elimination winner Airton Cozzolino in another final – this time for the overall event win. Sebastian finished the event in third position. Congrats! Someone get that man a beer!

James snuck into a pitching wave on his first run, got a big cover up and managed to sneak out through a little gap in the front door. Meanwhile Airton was on the biggest wave of the day. ‘Are you kidding?’ we screamed in the media room. His wave riding is just so staggeringly powerful. Bam-bam-bam, turn after turn, huge spray at the lip every time. 7.87 first wave, 7.5 for his second.

Remember, if James could beat Airton in this heat, he’d force a super final and they’d go at it again as Airton had to be beaten twice as the single elimination champion.

Airton looked better able to take advantage of the ‘dirtier’ sections on his hacking frontside approach, cutting back into the wave whenever an off-the-lip wasn’t possible. James, however, was unleashing thunderous hits right at wave’s peak, battering the crumbling lip line into submission.

Although he’d learnt from the single elimination final against Airton that focusing too much on chasing a barrel wasn’t a reliable strategy, he knew that if there was a sniff of a big one it needed to be his.

James then switched his approach and started tacking back and forth in the upwind corner. He was looking for a wall with potential to throw and bailed early on a couple of waves even though they looked well set-up for multiple hits. He must have seen Airton’s combination strikes.

In 17 years, I have never seen anyone bottom turn as hard and tight on their frontside as Airton. He actually comes out of his turn with more speed, rather than less, which means that his smacks at the top of the wave are simply outstanding. Pure power surfing. Eight waves in and his first two scores still remained his best, however. Airton’s the ultimate competitor. Like a world class sprinter he can power out of the blocks, start on a high and put his opponent under pressure from the start.

It was a quiet few minutes for the Australian until he managed a 5.23, taking him up to 12.18. He worked his way all the way down a really long wave from one side of the competition box to the other but managed only three turns because there had been so much white water to evade.

Wave ten for Airton was spectacular and obviously going to get a big score. An 8.83 dropped, made up of the most vertical animalistic succession of turns and hits – perfectly at the lip every time and never out of the critical section. I hope we can show you that wave in full on the highlights video. It was absolutely incredible.

Waves started to shape up bigger and right at the end of the heat James pulled in looking for the cover up once more. It didn’t happen. A minute later he got another opportunity – this time he went in and pulled out punching emphatically through the curtain. It wasn’t massive or particularly deep, but he’d found one and it was worth 8.07, bringing him up to 15.02…

In the end the difference was that 8.83 wave where Airton plugged his brain directly into the main power supply of the wave and let the voltage flow through his body, charging that face as hard as any wave has ever been kited from start to finish. Total destruction.

The riders were going so hard that they filled their allotted 15 wave count with five minutes left to go, so it then turned into a free session… and there were highlights!

Airton banked into yet another turn, brushed his fingers in the water as he looked up and saw the chance for shade. He allowed his turn to slow and bring him up the wave where he re-set his rail, pulled in and punched through the curtain. Sadly, no score showed up on the scoreboard – it was wave 17!

Once again a packed heat from these two and an absolute joy to watch: 15 counting waves each. There’s the bell. School’s out.