A week earlier, the rider from Frontignan had missed Douglas' record by a hair's breadth - just 0.02 knots.

Despite the frustration, Sylvain Hoceini got back to the water, and, nine days later, he wrote his name in the speed sailing books.

"After questioning the failure of my previous world record attempt, perseverance and your encouragement helped me go for a last successful run. Thank you for your support," expressed the French.

The new world record for the fastest mile on a kite will have to be ratified by the World Sailing Speed Record Council (WSSRC). 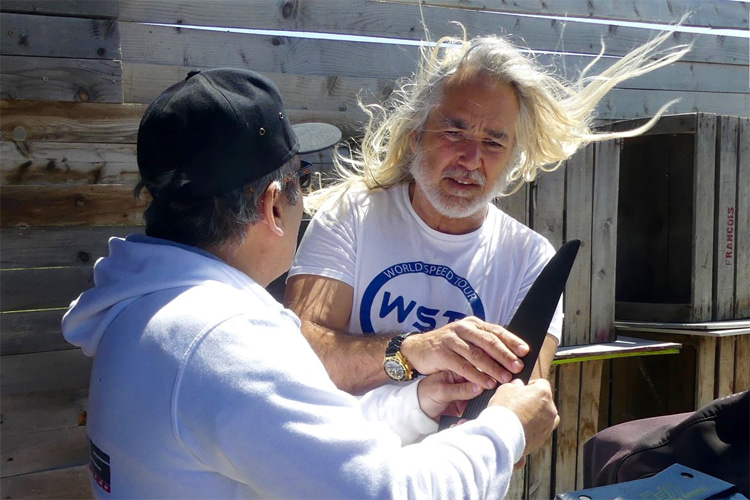 Prince of Speed started as a more or less informal event organized by a well-known character speed sailing enthusiast.

Principe Andrea Baldini is an exotic Italian multisports fanatic. With a doctorate in economics, he and his family have been in the real estate business ever since.

Baldini loves music composing and singing and is also into sports like tennis, show jumping, boxing, judo, skiing, and other water sports.

He participated in the Speed World Cup series and, in 2009, he won the European title.

Principe Baldini has been chasing world record for 15 years at Saintes-Maries-de-la-Mer, Luderitz, Southend-on-Sea, and La Palme.

The Italian says he learned to develop a speed sailing channel and improve his riding skills with Anders Bringdal.

In 2012, Baldini suffered a car crash while traveling from Luderitz, in Namibia, to Cape Town, South Africa, and broke four vertebrae.

Against his doctor's advice, he returned to speed sailing and moved to France.

In 2016, he became the first Italian to break the 40-knot nautical mile barrier.

On the inaugural edition held in 2018, Prince of Speed set five world records and 12 national records.

The next challenge is to develop a 360-degree event with professional photo and video coverage, live scoring, and international media coverage.