On January 16th, Maui's north shore was hit by the biggest swell in years. The buoys hit 22 feet at 17 seconds so I knew Jaws would be huge. I packed up the Jetski and headed up the coast. On arrival it was windy and massive. There were 40 jet skis, 15 boats, and only a handful of people tow surfing. I pumped up a 6 meter Duotone NEO SLS and this video is what resulted. 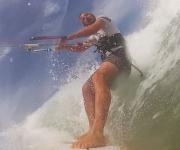