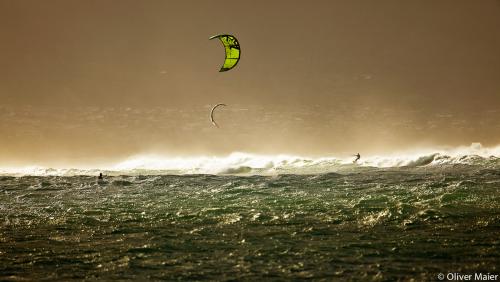 Maui is part of Hawaii. Hawaii is the newest of the 50 U.S. states, and is the only state made up entirely of islands. It is located on an archipelago in the central Pacific Ocean, southwest of the continental United States, southeast of Japan, and northeast of Australia. The state was admitted to the Union on August 21, 1959.

The island of Maui is the second-largest of the Hawaiian Islands at 727.2 square miles (1883.5 km2) and is the United States' 17th largest island. Maui is part of the state of Hawaii and is the largest of Maui County's four islands, bigger than Lana'i, Kaho?olawe, and Moloka'i. In 2000, Maui had a population of 117,644, third-most populous of the Hawaiian islands, behind that of O'ahu and Hawai'i. Kahului is the largest town on the island with a population of 20,146.

One spot on Maui is Kanaha Beach Park, other names for this spot are: Pro Beach, Aqua Beach, Kaa Point and Flash Beach.

Wind blows all year round, but the best months are April-October.

Besides kiting you can enjoy:
-Fishing
-Biking

-And last but not least experience the nightlife in Kahului

The climate of the Hawaiian Islands is characterized by a two-season year, mild and uniform temperatures everywhere (except at high elevations), marked geographic differences in rainfall, high relative humidity, extensive cloud formations (except on the driest coasts and at high elevations), and dominant trade-wind flow (especially at elevations below a few thousand feet).

Maui itself has a wide range of climatic conditions and weather patterns that are influenced by several different factors in the physical environment: Half of Maui is situated within 5 miles (8.0 km) of the island's coastline. This, and the extreme insularity of the Hawaiian Islands themselves account for the strong marine influence on Maui's climate. Gross weather patterns are typically determined by elevation and orientation towards the Trade winds (prevailing air flow comes from the northeast). Maui's rugged, irregular topography produces marked variations in conditions. Air swept inland on the Trade winds is shunted one way or another by the mountains, valleys, and vast open slopes. This complex three-dimensional flow of air results in striking variations in wind speed, cloud formation, and rainfall.

Check this site for a discription of the climate per month:
http://www.hawaiiweathertoday.com/?page_id=16

The beach actually extends much further than the boundries of the park and is popular with locals who come here to swim, fish, surf, windsurf, kiteboard, and play volleyball. Because of its location far from the tourist centers of Maui, few tourists ever visit this beach, except the occasional adventurous cruise ship passenger (the ships dock about 1.5 miles away) or backpacker. The beach is very large, and you can almost certainly find a secluded area any day of the week. Kanaha Beach park is open from 6:30am to 10:00pm daily. The lifeguard stations are manned from 8:00am to 4:30pm.

Beachrules:
Marine rules require kiters to give right of way to canoes. Paddlers and Kiters have worked out a safety agreement that specifies Kiters stay 200 feet away from any canoe. Canoes sometimes drag fishing lines behind them.
In addition, all kiteboarders are under specific FAA waiver stipulations. The FAA waiver stipulates that all kiteboarders must comply with:
1. No maneuvers shall be performed over persons or property not involved with kiteboarding activities;
2. No kiteboarding in the 2 mile long by one mile wide corridor at the end of the runway in Spreckelsville (see map);
3. The waiver is applicable and only valid between the hours of official sunrise and sunset;
4. All kiteboarders operating within the area from Ho'okipa to Waihee Point shall be responsible for seeing and avoiding non-participants; and
5. The kite will not be operated 125 feet above sea level. Maui County requires that windsurfers and kiteboarders observe the 11 o'clock rule , which was developed by windsurfers, fishermen, spear fishermen and swimmers 17 years ago, and adopted by the state. That rule allows for swimmers and fishermen to have exclusive access to the ocean prior to 11 am. After 11 am, when the winds pick up to near-full strength, windsurfers and kiteboarders have shared access, while watching out for any fishermen who may still be practicing their sport.

Tropical smooth and clean water inside with grinding outer reef. Tide is not an issue. The waves on the reef are all time from September to May. The watertemperatures are between 24°C and 27°C.

The (trade)wind on Muai blows all year round. The main direction is NE wich is side-onshore on Kanaha Beach Park. The wind in the summer is stronger than in the winter.

Summer wind:
From April-October the wind is the strongest.
Winter wind:
The wind in the winter is more divers. In the winter the Kona can blow from the south, wich is offshore at Kite beach.

On Maui you can kite on allot of other spots. Check out the links below.