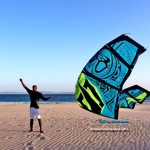 Naish’s newest team rider, Ariel Corniel was lucky enough to be born in one of the best kitesurfing locations in the world…Cabarete. This small town in the Dominican Republic set the stage for young Ariel to soon become a local kiteboarding legend.

Years of hanging out at his local beach proved educational for Ariel as he watched countless kitesurfers hone their tricks day after day. When the opportunity emerged for him to try his hand at kiteboarding, he rose to the top almost immediately and hasn’t slowed down ever since.

Competition after competition, Ariel proved in 2007 that he was a force to be reckoned with when he won 1st place in the Cabarete World Cup. He then proved it a second time in 2010 when he took 1st at the very same event and most recently, 2nd at the 2014 DR Nationals on his home turf.

Ariel’s “rags to riches” story is what continues to motivate him both on and off the water. Starting out with nothing, Ariel has worked his way up to become the pro athlete you see today, traveling all over the world for kiteboarding competitions in hopes to become the next World Champion.

With his endless motivation, determination and passion for life and kiteboarding, Ariel continues to rattle the competition at every event and Naish is thrilled to see what he has in store next!

Welcome to the family Ariel!